Since my last post in June alot has happened in 2 months. I've moved apartment, been to Ireland twice on holiday and the new football season is underway.
I now live in an apartment in the centre of the town, not fully complete yet but livable. We have an astro turf bathroom, can it get any better than that? My room is finished, new sockets put in, and a few Pats posters and scarves on the wall to make it a Saints room. There's an Irish flag hanging high above the town on our rooftop terrace aswell.

As I said I went to Ireland twice, in June and in August. Firstly with some German friends for a holiday and the second time for my Granny's 80th, to see the Saints beat relegation candidates Shelbourne and to improve my pitch & putt skills.

In June I did some touristy things that I would have never thought of doing before. I went to the Jameson Brewery for the first time which was good and went to a few bars in Temple Bar where I was the only Irish person in the place.

August was a surprise visit for my granny's 80th party. I didn't tell many people I was flying back and then turned up at the front door.All my relations were home, an uncle, 2 auntys and a cousin from Australia and an Uncle and cousin from America. I was home for 5 days and during the that time we got a game of cricket in and a few practise innings in the back garden and two games of Pitch & Putt. My Tee shot let me down but my putting kept me in contention until a disaster on the 16th hole where I lost 2 balls off the tee. I wasn't much better at the Cricket, as a batsman I did ok but I'm a poor Wicketkeeper. There was a few nights in Dalkey with the family and I had three chippers when I was back because they don't do them over here, had a big fuck off roll aswell because also like chippers they don't do them here and brought back 8 cans of Bulmers because they don't do them over here. I left the halldoor wide open one night aswell, but sure look, I was on holidays.

The new football season is back under way.We have a signed a good few new players and one player has left. Our first team have done well since being promoted, winning all our three away games and at home drawing twice and losing once. The second team have won 9-3 and 4-0 and are hoping to get promoted this season. 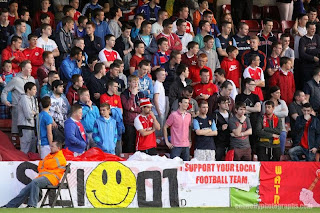 It was good to get a Saints game in when I was back in Dublin. The Supersaints won 1-0 with a goal from Stephen Maher and luck from the lucky Gerbil. Still top of the league and going for the title
Posted by Unknown at 22:08 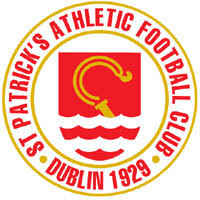